The future IoT: LTE-M vs NB-IoT

What will be the gold standard in the future of low power connectivity in asset tracking?

When the Internet of Things (IoT) burst onto the technology scene, it quickly gained a reputation of being a disruptive technology. Traditional telecommunication providers witnessed how startups and early adopters quickly developed and deployed new technology to power commerce and industry, leading to ever-increasing levels of digitalization and automation.

The effects are so impressive that established powerhouses are taking note of the multi-billion dollar changes that IoT is making to numerous industries. While their response to this revolution will undoubtedly fuel many new and innovative IoT applications, it remains critically important that you choose the right technology for your needs.

As the saying goes, “All roads lead to Rome”. However, not all roads are equal. It all depends on your needs, situation and priorities. For example, do you want to get there quickly? Carry a large load? Avoid paying a toll? Use a specialized vehicle? Carry a transponder? Or do you have other requirements or concerns?

Choosing the right road requires knowledge and experience. Happily, for our customers, Suivo knows the best way for you.

(Not sure about a technical term or abbreviation? Check out the glossary at the end of the post for a short explanation.)

In the early days of IoT, traditional telecommunication providers saw fast moving open-source initiatives and alliances react to an emerging need for low power connectivity solutions. In many cases they successfully enticed customers and developers to favor the disruptive technology by promising low power consumption and easy deployment.

Many telecommunication providers even joined the low power revolution. The telco providers set up LoRaWAN networks or managed local Sigfox network infrastructure in response to enterprise customers and partners insisting on modern IoT technology to support their operations and development.

However, operating in an unlicensed band was not a long-term strategy for the telco providers. Instead, they focused their efforts into developing a new class of low power connectivity solutions backed by the expertise and experience of communication veterans, operating in their coveted protected frequencies and using industrial-grade networking hardware.

The most common technologies used today are LTE-M (Long Term Evolution – Machine) and NB-IoT (Narrow Band – Internet of Things). Both have proven to be effective and reliable in real-world IoT situations, which has led many telco operators around the world to either establish at least one of these technologies or plan to in the near future.

According to the GSMA (Global System for Mobile Communications), there are 47 LTE-M and 98 NB-IoT networks active worldwide as of November 2020. More network operators have announced plans to launch an IoT network as part of their 2G phase-out strategy, which indicates that both LTE-M and NB-IoT are viable replacements for the ubiquitous 2G/EDGE connectivity on which many machine-to-machine projects and products currently rely.

While 3G has the technological sophistication required for these projects, it is rarely adopted as it is too power-intensive. 3G was developed for high bandwidth applications where data throughput capabilities were more important than power consumption, such as consumer smartphones.

Compare this to LTE-M and NB-IoT, which were designed specifically for low power applications. This gives IoT developers access to the technology they need, with the added benefit of the telco operators’ expertise and experience in wide international coverage, reliable long-term operation, secure encryption, and manageable roll-out.

Which is best for asset tracking? LTE-M or NB-IoT?

With telco network operators launching both LTE-M and NB-IoT you might be wondering which technology is best suited for asset tracking. While the two technologies are ideal for IoT, there are significant differences between them.

As the name suggests, NB-IoT uses a single narrow band (or range) of radio frequencies to help lower power consumption at the cost of available bandwidth. However, this narrow frequency band also means NB-IoT is not suitable for moving objects as the doppler effect shifts the frequency, which can cause the loss of ongoing data transfers.

LTE-M is a broadband technology which operates on typical LTE frequencies, and offers higher speeds and bandwidths combined with slightly higher power consumption than NB-IoT. However, as LTE-M can achieve (much) higher speeds, the overall power efficiency can be lower than NB-IoT because transmission of low data volumes can occur more efficiently. The higher bandwidth and lower latency of LTE-M also allows operations like firmware updates and other downlink activities, which helps to ensure reliable long-term functionality in ways NB-IoT cannot.

In fact, LTE-M can be used for every Low-Power Wide Area IoT application due to its low power consumption. While there is currently no NB-IoT use case that LTE-M cannot also solve, NB-IoT is more suitable at the lowest end of the connectivity spectrum for which it was designed. This includes applications such as sensors in smart metering or smart buildings. LTE-M is much more suitable for real-time asset tracking applications where the devices can move about and the uplink/downlink requirements can vary throughout the device’s lifetime.

The future of LTE-M

Based on its characteristics, LTE-M is likely to become the gold standard for asset tracking in the future. However, there needs to be further agreement and integration with existing systems and networks before this will be universal.

2G, for example, is deeply rooted in many IoT applications, such as the European eCall system (a European initiative for rapid assistance to motorists involved in a collision anywhere in the European Union which specifies 2G as the required connectivity technology) which was made mandatory as recently as April 2018. This means European operators cannot simply phase out 2G any time soon, leading to forecasts that 2G will be around in the EU until at least 2025.

Internationally the situation is different. In North America there is less reliance on 2G networks, and some Asian countries have already phased out 2G entirely and are already planning to phase out 3G.

GSMA has recently announced that the LTE-M and NB-IoT technology deployed today are part of the 5G family, so clearly LTE-M is a future-proof technology which is here to stay for the foreseeable future.

It should be noted that LTE-M is not yet available everywhere, so switching over completely is not an option at the moment. However, with universal coverage in mind, Suivo’s Carbon-class devices are already available with an “LTE-M Ready” configuration even though Proximus (Suivo’s preferred telecommunications partner in the EU) does not currently offer LTE-M connectivity in Belgium. Suivo’s future-proof strategy combines the new LTE-M technology with a 2G “eGPRS” fallback, which means our devices can connect on 2G and LTE-M. When the LTE-M feature is activated, the device prefers LTE-M networks where available.

Discover how we implement our asset tracking solutions here!

Contact Suivo to discover how asset tracking with LTE-M technology can simplify your asset management.

IoT
Internet of Things describes a network of physical objects that are embedded with sufficient technology (sensors, software, etc.) to connect and exchange data with other devices and systems via the internet.

Robert is our hardware specialist and engineer. From the very beginning of Suivo, he's been the brain behind all of our hardware components. Keeping up-to-date with anything from connectivity protocols, new technologies and market-movers is a big part of his expertise.

What IoT can mean for Waste Management in your city or community?

Managing our waste. It's definitely a thing. Sustainability is a hotly debated topic and from many angles, people are thinking about how to be smarter and more sustainable. Read more. 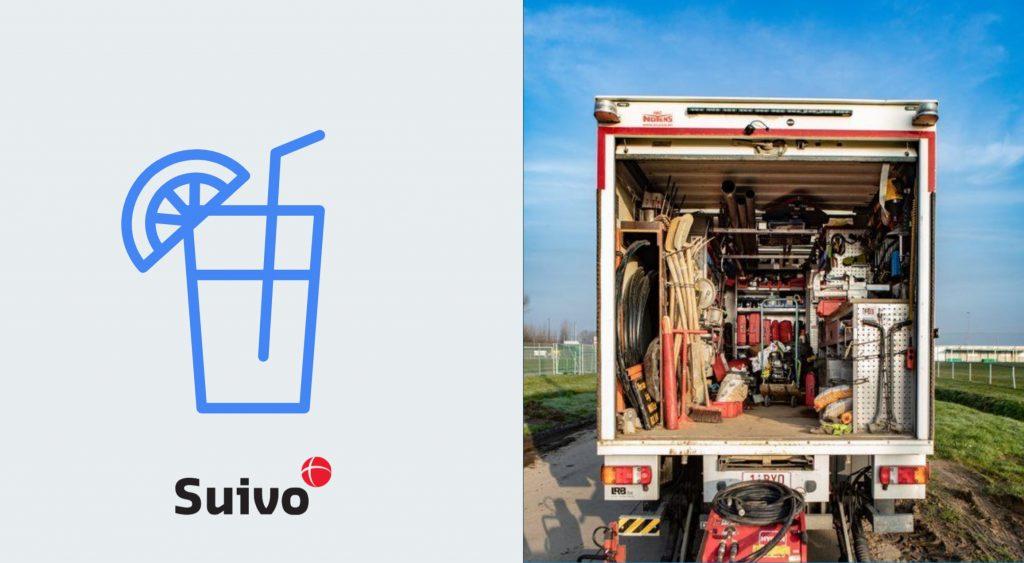 Asset Management 2.0? Digitize your asset management and link it with your inspection data!

Thanks to tagging and tracking of your assets small and large, you keep an overview of all your stuff and that has quite a few advantages. Discover it here. 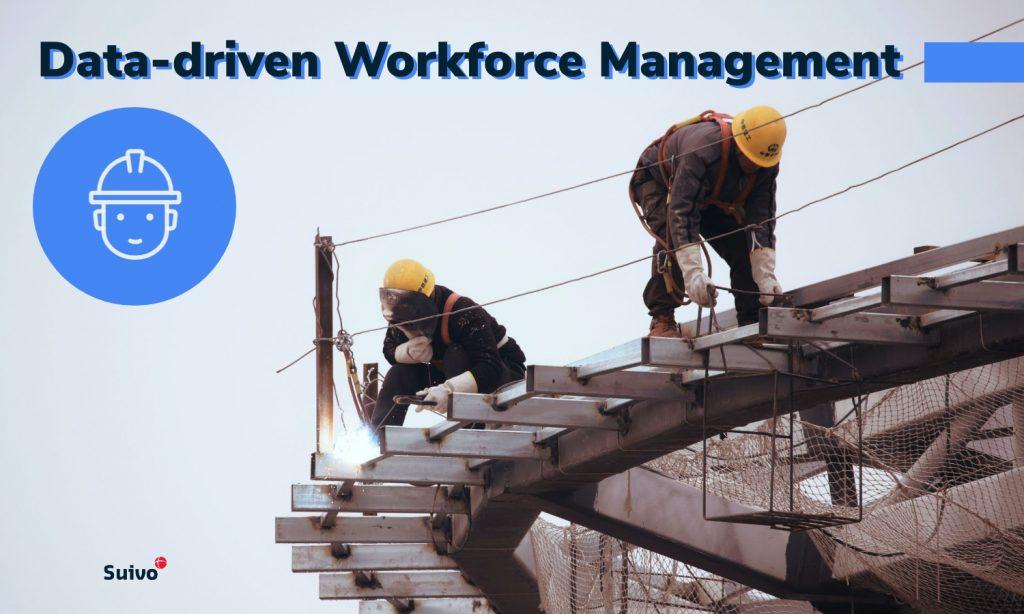 The power of data-driven workforce management

"WFM" is understood to mean managing, regulating and directing labor and personnel. There are a lot of software or tools available to facilitate and/or automate the management of your workforce or to connect your mobile colleagues.